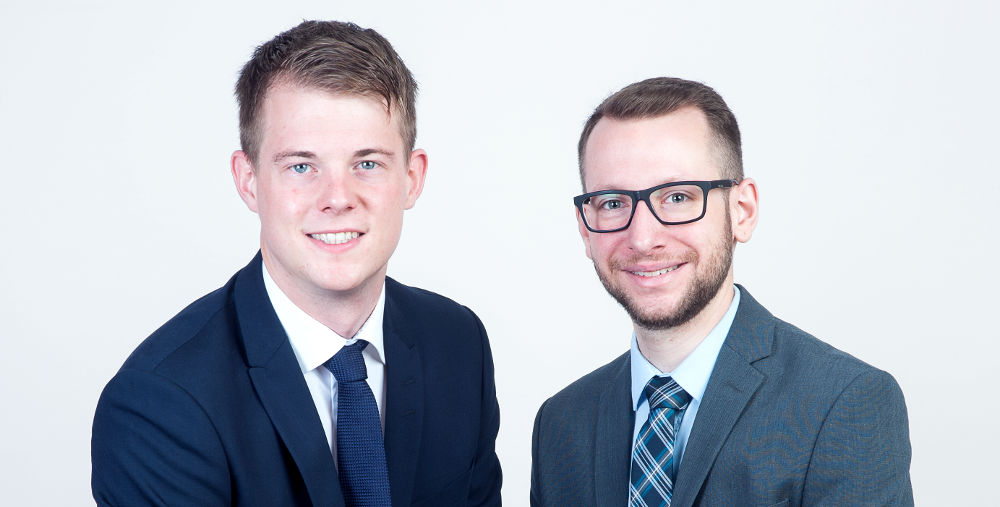 Edoardo Köppel (Founder & CEO)
Edoardo studied law at the University of Zurich and started his own business as a student. At cancelled.ch he is responsible for the management and handling of cases, as well as marketing and public relations. In addition, he takes care of all financial aspects, including the payment of compensations to our customers. He contributes very directly to making our customers happy. He likes to travel the world to get to know other cultures and to enjoy culinary experiences.

Simon Sommer (Founder)
Simon studied law at the Universities of Zurich and Bern. At cancelled.ch he processes the cases, conducts legal research, and develops the legal systems with the IT team. Every day, we ensure that our customers’ rights are served with as much ease as possible. Of the entire team, Simon spends most of his time at airports and in the air, partly because of the distance to his partner.

How it all started

The idea for cancelled.ch was born in the Vienna Airport when Simon and his partner wanted to fly via Berlin to Chicago. First, their flight from Vienna to Berlin was cancelled. After a laborious journey, they finally arrived in Chicago but without luggage.

Since Simon was already interested in consumer rights at that time and was considering continuing his education in passenger rights at the university, he knew that his girlfriend and he were entitled to compensation. Thus, he contacted the airline. Despite a clear legal situation, the airline tried to avoid responsibility.

A few days later, Simon and Edoardo met in Lucerne for a coffee, and Simon told him about his experience regarding the difficulty of obtaining what was rightly his as a costumer. This gave Edoardo and Simon a bright idea: they wanted to help air travellers get their compensation with a modern and easy-to-use online legal services tool. The goal was to alleviate the imbalance between the parties and bring the customers on par with the airlines.

The best part of the meeting was that Edoardo already knew two IT cracks with whom he had previously implemented Legaltech projects. He brought the idea to them and got them on board.

The first few months were difficult. The airlines often stubbornly tried to avoid payment or settle with vouchers. However, they eventually realised that they could not fight the right legal strategy.

Eventually, the airlines realized that their delay tactics would not work, and since then cancelled.ch has successfully settled many cases completely out of court. However, if the airlines are brought to court, it costs them a lot.
It is a very good feeling for us as a small start-up to counter such companies. Our clients appreciate our determination to help them obtain the compensation that is their legal right.

The website including the Online Claim Checking Tool, which automatically calculates our customers’ compensation based on EU law for our customers, has been available since February 2017.

With just a few clicks, customers can enter the data about their cancellation or delay, and the team at cancelled.ch will take care of the rest.

We are a Swiss start-up that helps customers obtain their rightful compensation from airlines. Many passengers tell us that airlines will do practically anything, from making up excuses to not answering or returning phone calls, in order to avoid paying lawful compensation for delayed or cancelled flights. We want alleviate the imbalance between customers and airlines. We do so by taking on the burden of recouping your compensation without any incurring any extra costs for you.

Scroll Up
Our website uses its own cookies and Google Analytics. With the further use of the website, you automatically agree to this. Further information can be found in the data protection declaration.OK